How to keep the American Dream intact?

The Equality of Opportunity Project is an impressive research venture using big data to explore new pathways to upward mobility in the American society. One of the pictures that came out of this project and that has made quite a few rounds of tweets is the following one: 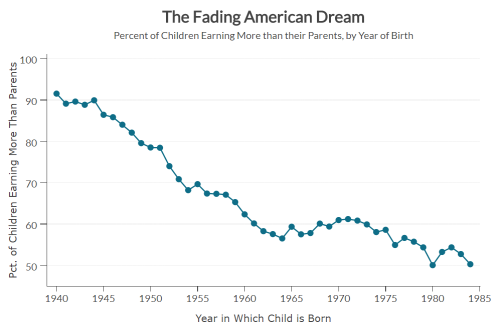 It shows the percentage of children earning more than parents over the years according to when a child was born. So if you were born in 1940 there was higher likelihood for you to earn more than your parents than if you are child born in 80’s. It is a very interesting data in itself and the paper itself makes an interesting read. (alternative link here)

I think this measure of the fading American dream provides an incomplete narrative of what might be happening in the US today. Given, that per capita incomes were much lower in 1940s compared to today and that economic growth rate measured by growth in per capita real GDP has stayed constant over this period at 2 percent per year (see graph below), it seems obvious that children born later would face a lower probability of doing better than their parents than children who were born in earlier decades.

I think the story of decline in absolute mobility is invariably linked with the nature of growth process in the US. Today there is an unprecedented increase in the skill requirement on an average to produce 1 unit of real GDP than in 1940s. Also, aging population means that there are less people who can acquire those skills. If this is coupled with a simultaneous rise in required time for skill accumulation, then at any given point in time we might see an increase in the proportion of people working part time reducing the probability of earning more than your parents. See Acemoglu and Autor’s Handbook chapter for skill biased technological change and its impact on the US labor market.

When looked at in conjunction with these changes in the American economy, we get some interesting policy implications.